On April 8th I wrote a post, Covid-19 Month 1. I envisaged adding an update each month, and in no time three months have passed! This partly reflects me being in a very fortunate position compared with most and partly because until a few weeks ago it looked as if here in Australia we’d tamed the virus, even if we hadn’t eliminated it.

Each Sunday I have a Skype chat with my sister: inevitably the conversation turned to the latest figures and the school maxim of ‘compare and contrast’; from the second half of April through to late June we rarely had more than twenty new cases a day (mostly from quarantined returning residents), with deaths being counted in ones and twos, in contrast with the UK. On 6 June, both New South Wales and Victoria reported no new cases for the previous 24 hours, with Queensland and Western Australia reporting one new case each. As I write this the numbers are (Aus/UK), cases: 10,251/291,000; deaths: 108/44,968. Even allowing for a population ratio of 1:3, the UK figure are still horrific. Is this because we’re so spread out? Scarcely: most of us live in a handful of big cities.

So with these happy numbers we started to look forward to returning to normality. More shops were open, restaurants were allowed to reopen, albeit with limited occupancy, and I felt safe taking the occasional tram ride. For my birthday, I invited my fellow church home group members for dinner at a local restaurant: it was the first face-to-face meeting we’d held in more than three months.

… it all went wrong. A judicial inquiry is being held to determine the exact causes, but as of now it appears that the private security firm engaged to guard the hotels being used to quarantine returning residents failed on several fronts. Were the allocated staff adequately trained and did they understand what was required of them? Apparently not. Did they exercise any common sense? From the lurid tales of them fraternising with those who were being quarantined, definitely not. What was the security firm’s management doing? And what responsibility rests with those in government (politicians and civil servants) who set this arrangement up. We shall find out. But the bar chart above tells all: these ‘security guards’ took the virus home, then spread it through their communities.

So now we’re back on stage 3 lockdown – no visitors allowed, restaurants closed and army-manned roadblocks isolating metro Melbourne (where most cases are) from the rest of Victoria, and Victoria from New South Wales. We’re only allowed to leave home for essential shopping, daily exercise, medical treatment and study/work (those unable to work from home). After the shock of July 10th’s 288 new cases, one couldn’t help be scared at the thought of this number continuing to escalate. The next day, 216 (phew). But it’s not over: 270 yesterday, 238 today and a small but growing outbreak in NSW. For the next week we’ll all be watching the daily numbers. Our experience is a warning to people everywhere not to be complacent.

The theme of my 60th birthday speech a few years back was ‘Life’s not fair’. I noted that I had enjoyed far more of life’s good things than most people, including good health and the extraordinary ‘achievement’ of having reached 60 without a single night in hospital (before you ask, I wasn’t born in one). But I’ve made up for this since, starting with a stay in the public Royal Melbourne Hospital in 2014.

Last month I spent two weeks in hospital, a week in Melbourne Private Hospital, then a week in rehab at Epworth Camberwell. How did this compare to my limited experience (as a visitor only) of English hospitals?

Firstly the UK and Australia have different attitudes to private health insurance. In UK private health insurance is generally offered as a perk by employers; few individuals buy it. Around 10% of the population are covered according to the Telegraph web site. Premiums are subject to 12% insurance premium tax and if your employer pays the premium, this is taxable as a fringe benefit .

Here in Australia it’s the opposite – roughly half the population have private health insurance^ even though they’re covered by our NHS-like Medicare. The private system is seen as taking load off the public system so if you don’t have private health insurance you may have to pay additional income tax (Medicare Levy Surcharge 1-1.5%). In addition the government pays part (33% in my case) of your premium as a rebate. Interestingly insurance companies are not allowed to cherry pick – e.g. All 63 year olds taking out the same policy with a particular insurer must be charged the same premium regardless of their medical history. 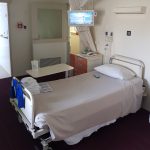 So staying in a private hospital is nothing exceptional in Australia. My rooms in each hospital, twin occupancy, weren’t that special, though TV and wifi were free. I could not fault the treatment I received. Without exception, the staff were excellent. As in UK hospitals, a good few of them were from overseas, working on contract.

But, unlike UK hospitals which in my limited experience are overheated during the winter, my rooms were cold and I had to ask for an extra blanket!

The food was good too (not a comment often heard from UK hospital patients), excellent at MPH, though surprisingly I struggled to find low-fat options on the menu. Useful hint for anyone under orders to lie flat on their back (for 48 hours in my case): pick toast for breakfast and sandwiches for lunch and dinner – you can eat them lying down without help!

But of course the best thing that happens in hospital is being told that you’re now ready to be discharged. In my case this was on my birthday, a great birthday present!